Coronavirus Update: We Remain Open For All Enquiries At This Time… Contact Us Today
More Articles

Peristaltic pumps are well known for their ability to handle abrasive slurries without suffering wear, which was why when a customer contacted us with a unit suffering from frequent hose replacement we knew something wasn’t quite right. 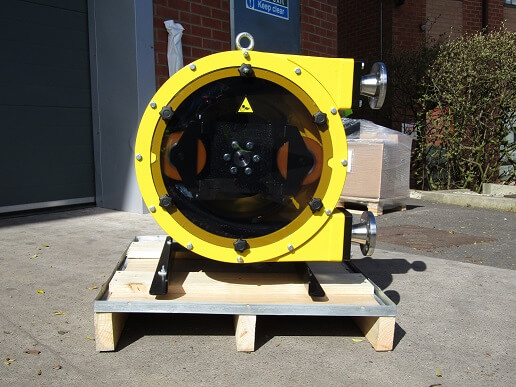 Specified by another manufacturer, the frequent wear of the hose was causing repeated maintenance on a system which was often left unattended for long periods of time, and an issue which required rectifying swiftly as the effectiveness of wastewater treatment was at risk of being compromised. The customer was losing faith in the technology and wondered if another solution may reduce maintenance intervals.

The customer was dosing Ferric Hydroxide (Fe(OH)3) into Pharmaceutical bioreactors. Ferric Hydroxide is used in wastewater treatment applications for the removal of unwanted contaminants such as heavy metals and other contamination from process effluent. It can also be dosed into bioreactors to reduce membrane fouling and increase biomass activity.

Flocculant Use with Effluent

Waste can be easily filtered more easily and separated from water as particles are large enough to be captured by filtration equipment, rather than finely dispersed throughout the fluid. Ferric Hydroxide is just one example of a flocculant used within the water industry where many differing types are used.

The unit was performing up to 18 cycles a day, with each cycle dosing up to 300L at each interval with Ferric Hydroxide Slurry being injected into a bioreactor tank.

On assessing the current pump set up there was something amiss. The existing unit was operating up to 3 times faster than a design we would specify for such an application. This meant it was suffering from abrasive wear operating at close to 100rpm. To put this in perspective, we wouldn’t normally operate a pump above 55rpm, and for a continuous dosing application would reduce unit speed to below 30rpm.

As the equipment was operating too fast, another issue was apparent in that the pipework was only 1” and if we were to reduce the speed, then the associated pipework would also need to be changed to a minimum of 1.5” - DN40. Had it been specified correctly from the outset then the corresponding pipework could also have been installed correctly, which now needed replacing to eliminate the issue.

Peristaltic pumps are well known for their simplicity in design, consisting of a single hose without valves, seals or O rings to wear, making them ideal for abrasive or dry products. In such applications it can quite often be the speed of operation which causes frequent spare part replacement and utilisting a hose pump of roller design means units can operate from as little as 1rpm up to 30 for continuous operation, whilst other technologies operate north of 200rpm causing units to suffer greatly from wear. The absence of seals ensures one of the often weakest & most problematic areas of a pump is not prone to failure and it is effectively designed out of the process.

We also felt that the pumping process could be further optimsed by changing the existing internal shoe design of pump to one of roller design which in low pressure applications causes less wear as there is virtually no friction between rollers and the hose, and power consumption is reduced by 30%.

Although the correct pumping technology had been applied to the process it had been incorrectly specified. Peristaltic design provides many benefits within chemical dosing and metering applications which can be summarised as follows:

8 Reasons to use a Peristaltic Pump for Chemical Dosing & Metering:

1.       Self Priming means there are no problems with high suction lifts.

We specified, supplied and delivered an FMP50 Roller Hose Pump which is fitted with oversized rollers, increasing hose lifespan and reducing energy consumption. The unit was fitted with ANSI flanges to ensure consistency with their on site pipework specification.

Although various options were offered the customer selected a unit operating at only 38rpm - close to a 1/3 of the existing unit to minimize the number of pipework changes on site. The customer is likely to see many years of problem free pumping with their new equipment.